The ants eating your house 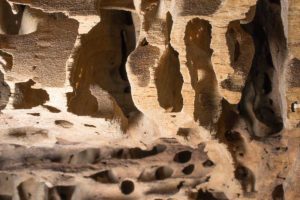 Carpenter ants are the largest predator, by weight, in the pacific northwest – pretty cool right? They outweigh the bears, cougars and wolves, which means there are a lot of carpenter ants out there!

Carpenter ants are one of the most impressive species of insect pest we have native to the coastal temperate rainforest. Unfortunately they can also be very damaging to our homes, and they can cause a lot of stress and grief to homeowners confronted with the sight of piles of sawdust being pushed out of their ceiling, or hundreds of swarming ants flying out of their walls!

Yes, sometimes. Carpenter ants get their name from the fact that they excavate their nests in wood, creating smooth tunnels and galleries in the wood. They are one of the most structurally important pests here in the Metro Vancouver and Fraser Valley areas. While they do not eat wood (like termites do), they can definitely damage it, eventually leading to serious structural damage to your home or business. Carpenter ants prefer to attack moisture damaged wood, but they will also happily excavate dry sound wood as well. As the ants excavate their nests, they remove and kick out the sawdust, further weakening wood which often already has some moisture damage.

How can you tell if you have carpenter ants?

What do carpenter ants eat?

Carpenter ants feed on a wide variety of foods containing either protein or carbohydrates. Examples include honey, sugar, meat, grease, and their absolute favourite, the honeydew produced by aphids. Carpenter ants are also major predators of other insect species. Of the entire colony, which may have thousands of individuals, only 5 to 10% will be out looking for food at any one time. So if you see a huge trail of big black carpenter ants, remember that you are only seeing a small number of the ants in that colony!

What kind of carpenter ants are found in BC?

While there are 10 species of carpenter ants native to BC the two most common structure infesting species are Camponotus modoc and Camponotus vicinus. All carpenter ant species are polymorphic, which just means they have multiple sizes of worker – 3 in this case. What this means is that they are not just “big black ants” – they may in fact be small (minor workers) or medium sized ants, and there are a variety of colour patterns among the various local species.

C. modoc are typically described as “big black ants” – they are the largest ant found locally (ranging in size from 6 to 17mm in length) and are all shiny black (with red legs, if you look closely). The winged female reproductives (they are even bigger than the biggest workers) which swarm out of nests from late March into May are the source of many a frantic phone call from homeowners. C. Modoc is the most common carpenter ant species throughout Vancouver and the Coast and if you live in a moist area or a heavily treed area, or both, you are likely to see this ant.

The main or parent nest is located in moist wood, including trees, stumps, landscape ties or water damaged wood in a structure. The single queen and eggs will be in this parent nest as the eggs require very high humidity so they don’t dry out and die. Mature carpenter ant colonies typically have many satellite nests located within structures in wood studs (including in dry sound wood), siding and joists, wall voids, and insulation (both fiberglass and foam core). Satellite nests are established as the main colony begins to require more territory or resources. These nests may be located as far as 750m from the parent nest. The satellite nest sites will contain workers, larvae, pupae, food stores, and winged reproductive stages.  Colonies of C. modoc can contain up to 50,000 ants and can thrive for over two decades, with all ants in the colony coming from that single queen!

C. vinicinus are also large native ants but they are red and black. These ants are similar in biology and habits to C. modoc but this species can have colonies of more than 100,000 workers due to the presence of multiple egg laying queens. C. vicinus is also prevelant in damaged wood but will nest in areas that are dryer than the other common carpenter ant, C. modoc.

Get Effective Ant Control in Vancouver

Successful carpenter ant control involves finding and removing or treating the nests in your structure, and preventing re-infestation from the remaining ants in the colony which continue to exist in the neighborhood around you.

Give us a call and we will be happy to help!